Warning: This post contains spoilers for Bodies Bodies BodiesBodies Bodies Bodies' real meaning explained. Directed by Halina Reijn from a screenplay by Sarah DeLappe, the slasher film released in nationwide theaters on August 12. Starring Amandla Stenberg and Pete Davidson, who are joined by a plethora of others, Bodies Bodies Bodies goes in a different direction from other horror thrillers, which are often focused on a killer who is out for revenge.

Bodies Bodies Bodies ends with a twist. While the group of friends believed David was killed by a mysterious figure, and turned on each other because of his death, it was actually David who sliced open his own throat by accident. Aside from the horror elements of the film, Bodies Bodies Bodies dives deeper into the behavior of the characters, their relationship to each other and to the digital world. With each revelation and death, the slasher film gets more horrific, and there are nuances layered into the plot that unearth the characters’ issues, as well as the film’s themes. 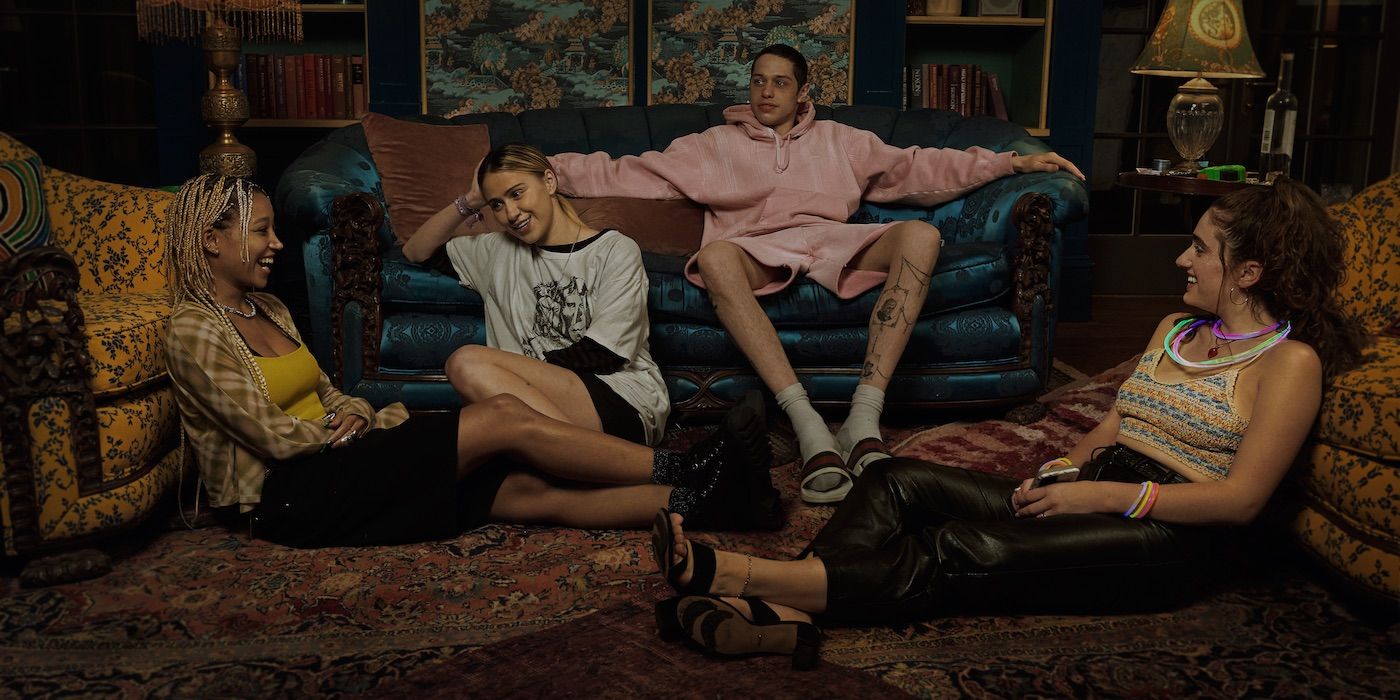 Bodies Bodies Bodies is layered with social commentary about Gen Z and, specifically, social media culture at large. The film’s ending confirms that no one actually killed David and that he died in the midst of recording a TikTok video of himself opening a champagne bottle with a sword (something that no one should actually try doing at home). This revelation not only subverts audience’s expectations of a slasher film, but showcases David’s desperate need to be validated by strangers on the internet. Why? Because he wasn’t getting that same attention from his friends, who had just seen him lose his temper and lash out at his girlfriend Emma. To hundreds of thousands of people on the internet, David could have looked cool doing the champagne opening trick.

While the audience knows David wanted to outshine Greg, someone he perceived as his rival, David’s actions convey the way in which social media culture plays an integral role in these characters’ lives, as well as the world at large. Social media allows people to see only snippets of another’s life. David, surely, was not going to explain to his captive TikTok audience the reasons behind his trick, but he would indeed have relished in the amount of likes his video would have received. His friends, meanwhile, would have seen his actions for what they were, likely judging him for it. The obsession with social media revealed that David wanted to hide his true self from others and present himself in a way that was wholly accepted by those who didn’t know him at all.

What’s more, Bodies Bodies Bodies is set during a hurricane precisely so that the characters wouldn’t have access to their phones as usual. Being disconnected from the digital world led each character to spiral. They blamed each other, became violent, and their friendships — flimsily held together through a group chat — were ruptured and destroyed for good because they were forced to confront things and react without whipping out their phones. In some ways, their digital connections kept their relationships going because it allowed them to avoid having deeper and more meaningful conversations about the things that truly bothered them. By the end of the slasher film, and after all the death they’d witnessed, Sophie was preoccupied by the fact that she finally had a signal, reconnecting her to the digital world.

Related: Every Movie Releasing In Summer 2022

It’s also worth noting that Sophie was desperate for Bee to believe her about not cheating with Jordan despite Bee asking to see her messages. How could Bee believe Sophie after everything that happened? The only way for Sophie to preserve her carefully curated persona was to keep her phone away from her girlfriend, separating her digital identity from who she wanted Bee to think she was in reality. Bee does something similar by keeping the truth of her circumstances — the loss of her job and dropping out of university to care for her mother — from Sophie. However, Bee couldn’t hide her true identity online, with Jordan discovering her secrets through a quick search of her name. Ultimately, people have different sides to them and the separation between their real lives and their digital footprint might be completely inconsistent with the identity they present to their closest friends and loved ones in the real world.

In addition to the film’s revelations about social media culture and the addiction to being online, Bodies Bodies Bodies also explores toxic masculinity, and, in particular, its effects on the women in the film. From the start, it’s clear David harbors bitterness and jealousy towards Greg, all of which ultimately stem from his own insecurities. David lashes out and begins accusing Emma of liking their friend Max more than she does him. Their fight leads him outside, where he tries to prove his masculinity and gain validation from TikTok followers, all because he feels less than and takes it out on the wrong people.

He also sees Greg as a threat to his own masculinity, which is why he tries to regain some of that lost confidence online. David’s death was the result of his toxic masculinity gone too far and that, in turn, affects the rest of his friends. The trauma of seeing him die carries over into everything, coloring the young women’s interactions with each other, how they perceive one another and David, as well as the paranoia and suspense that courses throughout Bodies Bodies Bodies. David’s actions essentially set off a chain reaction that leaves his female friends in a state of constant fear and anxiousness.

The central premise of Bodies Bodies Bodies may not be, but the ending of the film and the discovery that no one actually killed David certainly leans towards nihilism. What the slasher movie is trying to say is that none of the events, including the accusations and experiences of the characters, were unnecessary. Crucially, airing out their drama was all for nothing. And, despite the characters learning a lot about each other, their issues were so deep-rooted that it didn’t matter if they came to the surface. Instead of working to fix their problems, repair the damage after what was said and done, all their confrontations did was make them turn on each other more quickly. The film's big twist proved that the characters were more than willing to destroy each other and their relationships; they had zero loyalty to one another, their actions pointless in the end.